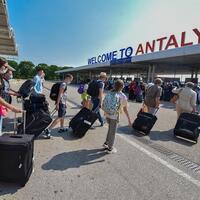 The number of foreign tourists visiting the province of Antalya on the Mediterranean coast could reach 12 million this year, according to a trade group.

More than 9 million foreign vacationers arrived in the city by plane between January and August 31, according to data from the provincial directorate of culture and tourism.

This marked a strong increase of 71% compared to the same period last year. In the whole of 2021, the popular holiday destination welcomed 9 million visitors from other countries.

Germans top the list of foreign visitors in the first eight months of 2022. Some 1.8 million German nationals vacationed in Antalya.

Despite the ongoing war in Ukraine, the Russians continued to visit the Mediterranean province. According to official data, almost 1.8 million Russians have visited Antalya since the beginning of the year.

The British were the third largest group of visitors with 805,000. Poles, Dutch, Kazakhs, Romanians and Israelis also topped the list of visitors.

Between June and August alone, more than 6 million foreign tourists arrived at Antalya airport. In the first eight months, 50,721 aircraft departed/arrived at the airport. Of these thefts, nearly 36,000 took place during the summer months. The airport handled nearly 36,000 international flights over the January-August period.

Despite the poor start to 2022, tourist activity picked up momentum afterwards, said Ferit Turgut of the Association of Turkish Travel Agencies (TÜRSAB), adding that the number of foreign tourists visiting Antalya could reach 12 million in 2022.

The tourist season could last until Nov. 15, Turgut said, noting that Antalya’s hotel occupancy rate is 90 percent. “We weren’t very optimistic at the start of the season, but the latest figures are promising.”

The industry has managed to diversify the markets and services it offers during the COVID-19 pandemic, Turgut noted.

Not only Antalya, but also other holiday destinations in Turkey are experiencing a rebound in tourist activity this season.

Hotel occupancy rates across the country have fallen to 71.3% from 66.1% in July last year.

In July 2019, when the COVID-19 pandemic had yet to affect the global travel and tourism industries, the occupancy rate of Turkish hotels was 75.6%. Istanbul’s hotel occupancy rate has increased from 69.6% in July 2021 to 80%.

More than 23 million foreign tourists visited Turkey from January to July, marking a solid 128% increase from a year ago.

In July alone, the country welcomed 6.7 million international holidaymakers, compared to 4.6 million people a year ago and just 940,000 visitors in the same month two years ago.