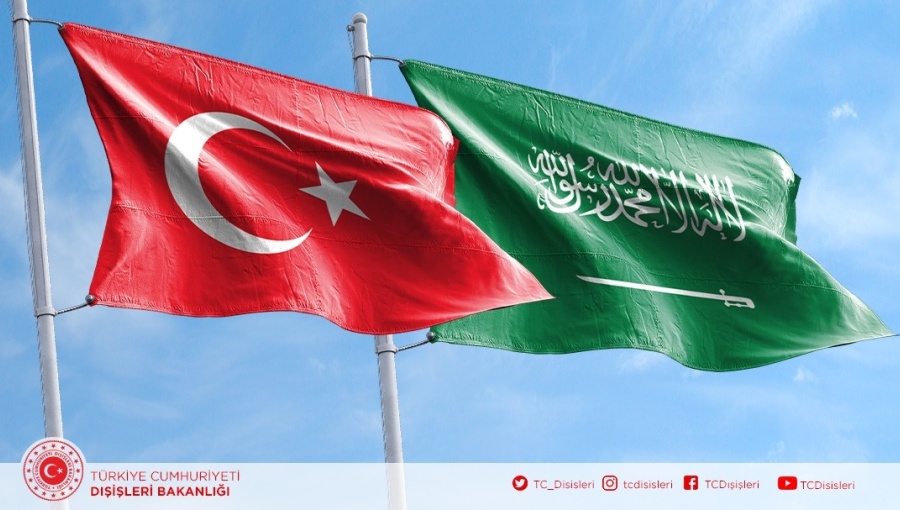 In November 2018, Turkish President Recep Tayyip Erdogan was apparently not convinced— following the brutal murder of dissident Saudi journalist Jamal Khashoggi at the Saudi consulate in Istanbul — that Crown Prince Mohammed bin Salman (MoS), is expected to remain in power as the de facto ruler of Saudi Arabia. And the Saudis were fuming at Erdogan for allowing the release of Turkish intelligence evidence that exposed MbS to global revulsion.

But that was then. It is now. The Turkish economy is going to hell in a bucket. Needs must.

Photo of the article: The Turkish Ministry of Foreign Affairs (@TC_Disisleri) celebrated on September 23 the national day of the “brother” of Saudi Arabia.

In turn, MbS sent greetings from the Custodian of the Two Holy Mosques and his greetings to Erdogan.

During the audience, aspects of bilateral relations and ways to develop these relations in various fields were reviewed (kerching!), while cooperation was also discussed on a number of issues of common interest (it would not be appropriate otherwise).

Before the meeting, Erdogan’s loyalist Daily Sabah Noted that Ankara and Riyadh have tried in recent months to repair the diplomatic damage caused during a decade of tension, especially in the aftermath of Khashoggi’s assassination.

The leaders declared their determination to reactivate economic potential and launch a new era of cooperation in bilateral relations, including in the political, economic, military and security fields (good to hear!).

Since September 21when the Fed raised its key rate by 75 basis points and updated its projections, the Chorus who sings “La lire est au plus bas” is back on stage. The dollar/TRY once again broke records.

Lira costs in the London offshore swap market meanwhile, since last week, have surged again, a sign that Turkish banks are reducing the supply of liras to the market to prevent foreigners from selling short.

Turkey’s five-year credit default swaps (CDS), September 26 broke above the 800 level, while the yield on the 10 years of the Turkish government Eurobonds rose above the 11% level.

Since the beginning of this year, the Turkish government has injected stacks of liras via loans. There are global conditions perfectly suited for another full-scale read crash.

It is not possible to estimate the exact moment of the upcoming accident. The government will burn everything it can in the forex market before letting the currency sink into the abyss.

Nope-Capital city controls, first introduced in 2018, have been extended over time. A strong restriction on capital flows seems beyond the government’s options as it could put another crack in the edifice.

We can expect a new instrument such as a CPI-indexed bond for individuals, which would be announced with the burning of even greater amounts of currency and a media campaign suggesting that Erdogan is fighting against the dollar.

In August, there was between 15 and 20 billion dollars of foreign exchange inflows into the country, which would come from Russia. In September, little was seen.

Black money has been welcome since 2008 under “wealth amnesty” diets. All options are tested.

Erdogan has spent all of the past week in the United States where he traveled to the annual UN General Assembly summit in New York. At one point, he was filmed in Central Park, cool as a moose, meeting passers-by (some of whom looked straight out of the central cast), like he didn’t care. You never know your luck. On September 19, he met with the Conference of Presidents of Major American Jewish Organizations.

So far, there are no reports that the American excursion has landed any hard capital.

Erdogan will run for re-election at some point in the next nine months.