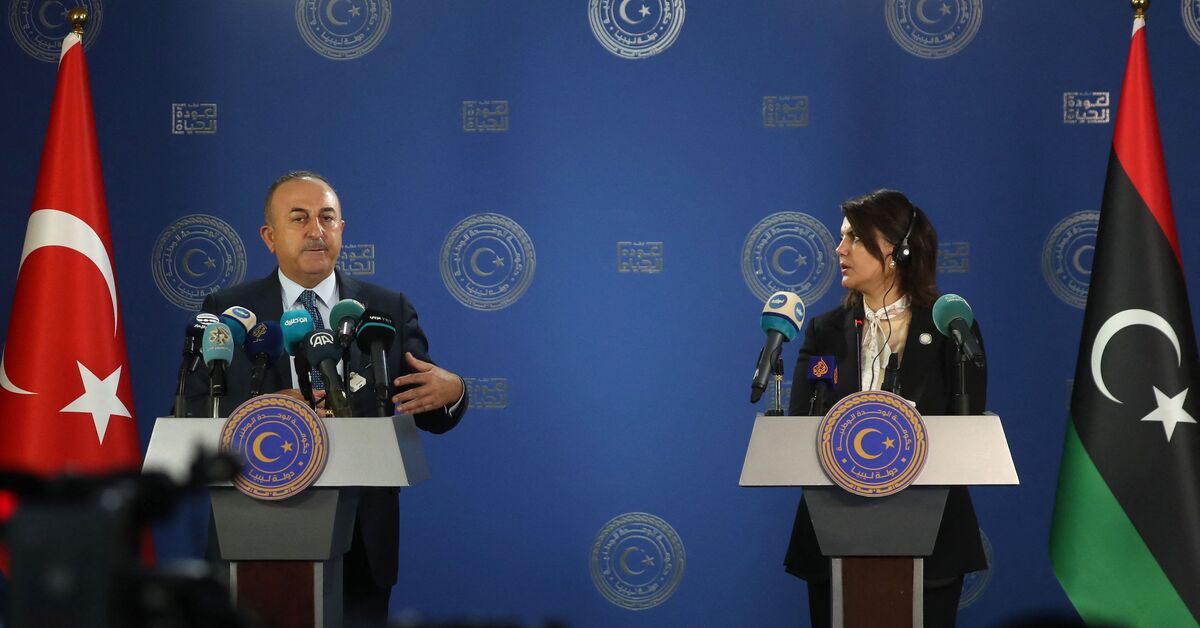 Turkey’s recent moves in Libya, including controversial new deals with Tripoli, have backfired on its budding bid to normalize relations with Egypt and gain leverage in energy disputes in the eastern Mediterranean.

Egyptian Foreign Minister Sameh Shoukry said last week that dialogue with Ankara had been halted after two rounds of exploratory talks due to “the lack of change in Turkey’s practices in Libya”. His remarks dampened Ankara’s prospects for a new chapter with Cairo atop its fence with the United Arab Emirates, Saudi Arabia and Israel. Cairo is upset with Ankara’s signing of three new agreements with the Tripoli-based caretaker government in October, including one on oil and gas exploration in the eastern Mediterranean. The deals have also angered Libya’s eastern-based parliament, which disputes the legitimacy of Prime Minister Abdul Hamid Dbeibah and has endorsed another prime minister.

Turkey hoped that the talks with Egypt, chaired by the deputy foreign ministers, would lead to a meeting between the foreign ministers of the two countries. Ankara was also changing its tone towards Egyptian President Abdel Fattah al-Sisi, replacing reprobation with praise. The Turkish Chargé d’Affaires in Cairo recently told Egyptian media that Ankara “appreciates the impressive progress on the socio-economic development program in Egypt under [Sisi’s] leadership.”

On October 30, Asharq al-Awsat reported that Turkish police had arrested 34 Muslim Brotherhood members, including journalists, who had called for anti-Sisi protests at the upcoming United Nations climate conference in Egypt. Detainees were at risk of deportation for breaching public order. Among them are believed to be people involved in efforts to revive pro-Brotherhood media in other countries, including Britain, after Turkey decided to restrict their activities last year.

On October 28, a post on the Twitter account of Hossam al-Ghamri – the former editor-in-chief of al-Sharq, one of the TV channels that Turkey has blocked – said that Ghamri had been arrested and risked being deported. Brotherhood supporters have launched a social media campaign urging Turkey to release the journalist. Finally, Ghamri tweeted on October 30 that he had been released.

Although Ankara forced the suspension of programs featuring vocal criticism of Sisi and shut down media outlets that defied the restrictions, its measures have yet to satisfy Cairo.

The detention allegations, circulated by social media accounts linked to the Brotherhood, were apparently misleading. Turkish officials said only one journalist was briefly detained and Arab media often publish such allegations “to stir up trouble and make the Muslim Brotherhood leaders in Turkey uncomfortable”.

That prospect could bolster suspicions in Cairo that Turkey is playing a double game, but Libya appears to be Egypt’s priority condition for reconciling with Turkey.

The energy exploration agreement and the two military agreements Ankara signed with Tripoli last month have been widely interpreted as Turkish support for Dbeibah in the dispute over its legitimacy. Cairo agrees with the argument that Dbeibah’s term ended in December 2021 when Libya planned to hold elections but failed, and it backs Fathi Bashagha, the prime minister approved by parliament earlier This year. In a gesture of protest that Cairo no longer recognizes Dbeibah’s government, Egypt’s foreign minister walked out of an Arab League meeting in September as Libya’s foreign minister began chairing the session.

Egyptian support for Bashagha shows that Brotherhood considerations are not the only factor shaping attitudes in Cairo. Sisi, for example, has been keen to normalize relations with Qatar and attract Qatari investment, even though Doha has not disconnected the Brotherhood.

Ankara tended to believe that Emirati money was the main driver of Egypt’s support for Khalifa Hifter’s eastern forces in Libya’s civil war. The UAE has funded Hifter but has stayed away from Libya since Turkey helped Tripoli break the siege of Hifter in 2019. Turkey has since normalized relations with the UAE, with Libya ceasing to be a subject of tension between the two countries. The support that Bashagha receives from the Brotherhood is said to have influenced the Emirati position.

The calculation underlying Ankara’s recent moves in Libya is that the Egyptian-Emirati partnership in Libya has collapsed and Cairo cannot insist on red lines as strongly as before without financial support. Moreover, Ankara may place less importance on reconciliation with Cairo now that it has broken its diplomatic isolation by playing a mediating role in the wake of the Russian invasion of Ukraine. Overall, Turkey feels free to do as it sees fit in Libya, playing ball with Russia on the one hand and gaining tacit support from partners such as the United States and Britain on the other. ‘somewhere else.

Yet Ankara could be wrong about Egypt. As Turkey seeks to expand its influence across North Africa, Cairo continues to view the Turkish military presence in Libya as a serious threat. According to Arab media, Sisi pushed for a condemnation of Turkey at the November 1-2 Arab League summit in Algeria. The final statement stopped short of open condemnation but dismissed “foreign interference” in Arab affairs, which was widely seen as a reference to Turkey and Iran.

Furthermore, Egypt remains aligned with Greece against Ankara’s maritime demarcation agreement with Tripoli and the economic zone it claims in the eastern Mediterranean.