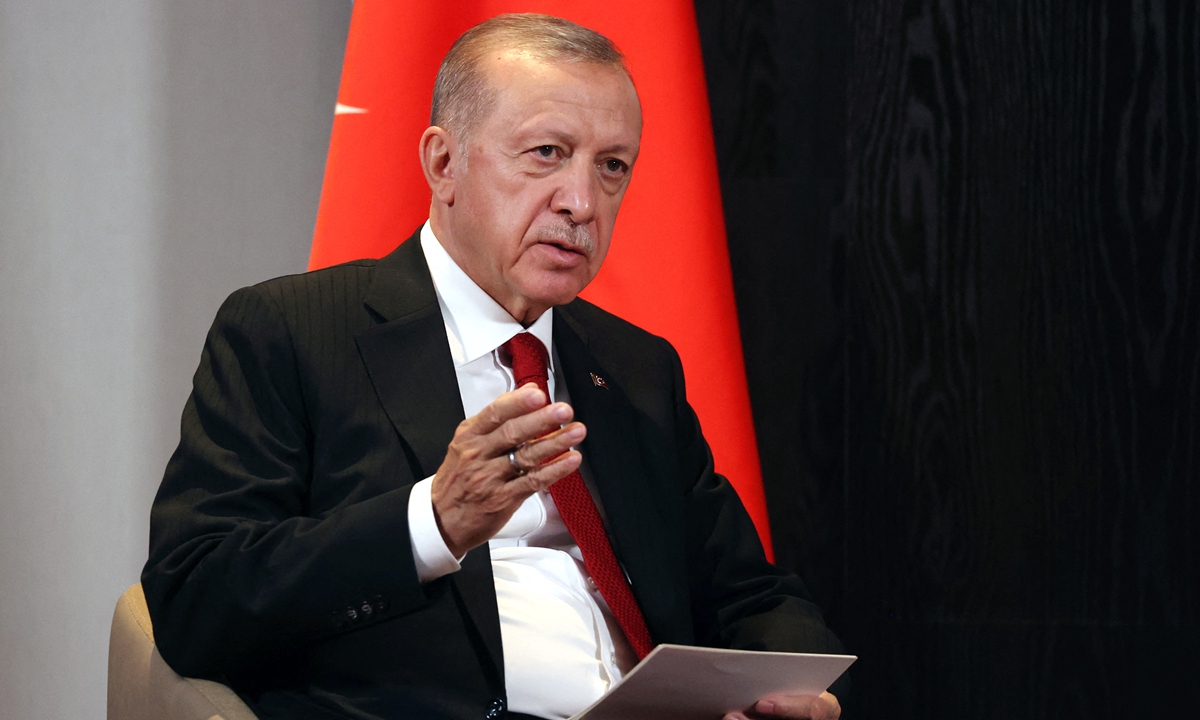 Turkish President Recep Tayyip Erdogan attends a meeting with the Russian President on the sidelines of the Shanghai Cooperation Organization (SCO) Leaders’ Summit in Samarkand on September 16, 2022. Photo: AFP

Repeated frustration at integrating with the West has prompted Turkey to step up its efforts to “look east”.

Turkish President Tayyip Erdogan has reportedly said he is considering joining the Shanghai Cooperation Organization (SCO) for his country. A successful bid would make Turkey the first NATO member to join the Eurasian Group.

Turkey now has an increasingly clear picture of how difficult it is for Turkey to integrate with the West. Turkey first applied for EU membership in 1987 and was granted candidate status in 1999, but talks have since stalled. This gives Turkey a strong sense of alienation from European countries, especially from Ukraine.

At Ukrainian President Volodymyr Zelensky’s request for his country’s immediate admission to the EU at the end of February, the European Commission responded by recommending that Ukraine be upgraded to candidate status (along with Moldova), and June, the 27 EU leaders unanimously endorsed this recommendation. Such an instant response must have frustrated Turkey.

In contrast, Turkey’s “looking east policy”, from the point of view of economy, politics and culture, has a relatively wider space to operate. This could explain why Turkey is showing interest in joining the SCO.

Whether Turkey eventually becomes a member state of the SCO largely depends on the sustainability of this intention, said Tian Wenlin, a researcher at the China Institute of Contemporary International Relations. Tian said that although both are Middle Eastern countries, Turkey’s situation is very different from that of Iran, which officially became a full member of the SCO at the SCO summit. recently concluded. While Iran has always been suppressed by the United States and the West, it has a stronger will to join the group than Turkey. As for Ankara, Turkey’s ties with the SCO also depend on the direction of its future relations with the West.

At the SCO summit, China and other SCO members granted Egypt, Saudi Arabia and Qatar the status of SCO dialogue partners and reached an agreement on the admission of Bahrain, the Maldives, the United Arab Emirates, Kuwait and Myanmar as new dialogue partners. It should be noted that a growing number of countries in the Middle East have sought to get closer to the SCO. It also shows that the attractiveness of the SCO is on the rise.

The SCO pursues a new concept of security with the cooperation principles of non-alignment, non-confrontation and non-targeting of third parties and emphasizes mutual trust, mutual benefit, equality, consultation, respect for the diversity of civilizations and the pursuit of common development among its member states. This will benefit all member states, observers and dialogue partners. Unlike Western blocs such as the EU, which seek to dominate other countries with a single value system and force candidate countries to make significant changes in order to join their group, the SCO is very inclusive.

Over the years, the practices of the SCO have shown that it never interferes in the internal affairs of its member states, while also being beneficial in stabilizing internal and external political and economic environments.

The world today is undergoing changes unprecedented in a century. These changes are emerging in an accelerated transition, as geopolitical conflicts become more intense than ever. At present, the countries that have joined the SCO or expressed interest in becoming SCO members are all developing countries, which have particularly strong requirements for stability and development. The international system dominated by the West, including the expansion of NATO, is characterized by the creation of conflicts and wars.

After the September 11 attacks, the United States’ 20-year counterterrorism policy in the Middle East has demonstrated that it has been far more destructive than constructive for the region. This may explain why some Gulf countries such as Bahrain, Qatar and Saudi Arabia, which have relatively close ties with the United States, have shown interest in the SCO, suggesting that the attractiveness of the model American-style governance is shrinking around the world. world.

The author is a journalist at the Global Times. [email protected]