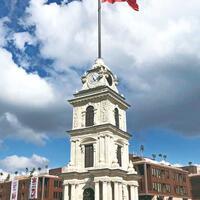 Recep Gürgen, a watch repairer in Turkey and abroad since 1960, said: “We have been talking about the clock tower in Antalya for a long time, but there are many across Turkey that I had to make new ones because the originals are not in place. .”

These include those in Istanbul, the capital Ankara and the northern provinces of Amasya and Bilecik, Gürgen said.

“We can’t say they were stolen or sold. Many of these clocks could not be repaired because no expert could be found, and unfortunately they were broken into pieces or scrapped,” he said.

“I had to rebuild the clock mechanisms in all these places,” said the watch repairman, known to locals as “Dr. The Clock.”

There are also clocks that have been preserved, such as those belonging to the towers of Dolmabahçe Palace, Istanbul University and Kosovo’s Mamusha, but they need to be repaired, Gürgen added.

“There are also other historic clocks, but they too will succumb to time. For while the clock towers are being restored, a budget is allocated for the tower, but not for the clock.

An investigation has been opened by Antalya’s governor’s office amid restoration and excavation work on the city’s clock tower into the claim that the tower’s four clocks were not d ‘origin.

Providing information on the Antalya Clock Tower, Cemil Karabayram, Head of the Cultural Property Department of the Governor’s Office, said: “It is more appropriate to complete the restoration process with an original piece rather than attach an imitation mechanism to the tower.

“We found photos of the clock tower from the Ottoman period through archival research. Later, we found a clockwork mechanism from the same period in a factory in Istanbul,” a- he said, adding that they had made the necessary applications to purchase this mechanism from the state.

The historical building, located on the bastions dating from the Hellenistic period, was built as a clock tower in the early 1900s during the reign of Abdul Hamid II.