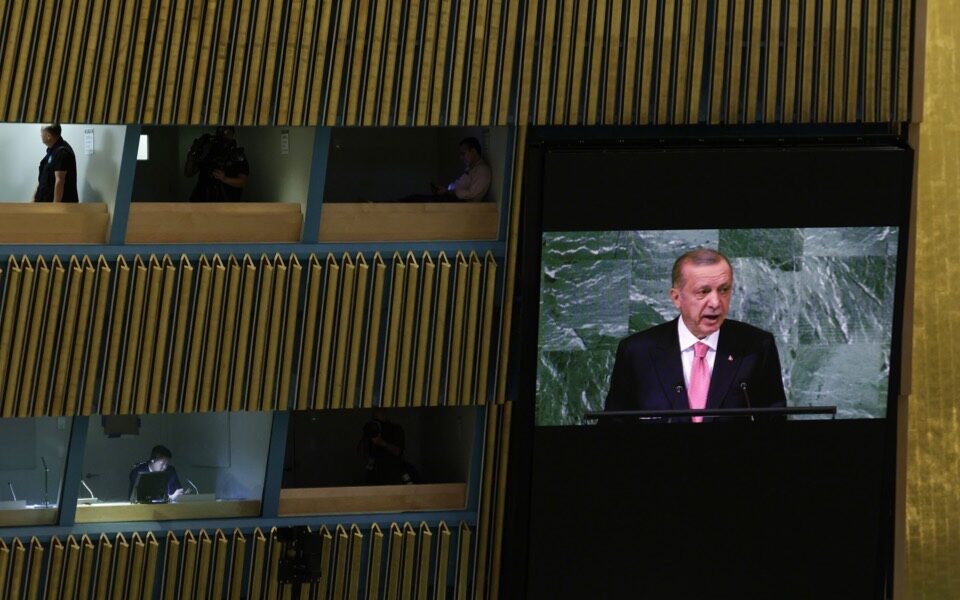 Turkish President Recep Tayyip Erdogan delivers his speech during the 77th general debate in the General Assembly Hall at the United Nations headquarters in New York on Tuesday. [Justin Lane/EPA]

On the centenary of a crime against humanity on the Mediterranean shores of Asia Minor, the statue of Turkish General Mustafa Kemal Ataturk on horseback facing and pointing west inscribed with the quote “Armies, your first target is the Mediterranean Sea. Forward,” stands taller and prouder than ever on the shore of the Turkish city of Izmir. Once known as Smyrna, over 150,000 Greek and Armenian residents of the city were massacred and over 750,000 refugees by Turkish forces when Smyrna burned in September 1922.

By subduing the rogue ally of Turkey, the European Union and the United States have failed to deal with one of the greatest persistent threats to peace and stability in Europe, in the Eastern Mediterranean, in North Africa, the Middle East and Central Asia. The neo-Ottoman ambitions of Turkish President Recep Tayyip Erdogan’s Muslim Brotherhood cannot be dismissed as a “local electoral political posture”, but constitute a clear and present danger that extends beyond Turkey’s borders. As the United States reverted to a “lead from behind” foreign policy stance, France assumed an increased leadership role in Europe, with Germany and the United Kingdom continuing to avoid judgment and to take serious measures in the area of ​​European security. But the West’s dangerous lack of leadership and unity is emboldening adversaries around the world.

Erdogan commands NATO’s second largest military force. Its military force of over 435,000 is one-third the size of the 1.3 million-strong United States force and twice the size of NATO’s second-largest ally, France, with its force of 208,000 men. The Turkish “allied” force, however, continues to demonstrate that it is an adversary with access to NATO secrets, codes, communications, tactics and defense plans.

Erdogan is emboldened by the lingering myth of Turkey’s greatly diminished geostrategic importance since the end of the Cold War, and the decades-long failure of the EU, US and NATO to cope. seriously to Turkish aggression. Turkey’s unreliability as an ally for decades, its role as a gateway for foreign jihadist fighters between Europe, the Middle East and North Africa, and its flirtation with China and Russia in advanced weapons purchases – such as Russia’s S-400 missiles – say Turkey cannot be trusted as a NATO ally.

The inability to rein in Erdogan has destroyed the credibility of NATO, the EU and the US. Apart from the indifference of the EU and major NATO member states to security issues and the botched US withdrawal from Afghanistan, the inability to contain another ally’s own aggression of NATO and to end his occupation of an EU member state for decades is another factor that encouraged Vladimir Putin to invade Ukraine. The United States and NATO member countries have been unable to stop Erdogan’s continued assaults on EU borders in Greece and the Aegean Sea, Turkey’s military occupation of a sovereign state of the EU, Cyprus, Turkish claims over the hydrocarbon resources of the EU Economic Zone in the Eastern Mediterranean, the desecration of UNESCO World Heritage Christian monuments, attempts to derail the unification of Cyprus, the strengthening of economic ties with Russia during the Ukraine conflict and Iran as it pursues its nuclear ambitions.

Erdogan’s hostile acts embody and represent the kinds of threats that the NATO Alliance and the United States are committed to deterring and defeating. From the desecration of Christian World Heritage sites by the United Nations Educational, Scientific and Cultural Organization (UNESCO) to the conversion of Hagia Sophia and the thousand-year-old Byzantine Church of the Holy Savior in Chora in mosques, support for migrant trafficking in Europe, violent attacks and oppression of Kurds in Turkey and Syria, attacks by diplomatic security forces on US citizens in Washington, DC, support for terrorists and militias Islamists in Syria, northern Iraq and Libya, the issuance of Turkish passports and sanctuary of Hamas officials, violations of EU airspace and territorial waters, illegal oil and gas exploration in the Exclusive Economic Zones (EEZs) of Greece, Cyprus and Israel, illegal claims of sovereignty in the Eastern Mediterranean, the purchase of advanced Russian S-400 weapons systems, the imprisonment of political opponents and jo journalists, the continued illegal military occupation of the northern part of EU-member Cyprus and support for Azerbaijan’s genocidal attack on Armenian Christians in Nagorno-Karabakh, the neo-Ottoman nationalist ambitions of ‘Erdogan are the greatest long-term threat to Western civilization, peace and stability since the rise of communism and the expansionist goals of the Soviet Empire during the Cold War.

Despite the passage by the United States Congress and Senate of the Eastern Mediterranean Security and Energy Partnership Act of 2019 and the sanctions imposed by the United States under the CAATSA (Countering America’s Adversaries Through Sanctions) Act Act) in December 2020 for Turkey’s acquisition in July 2019 of an S-400 surface – to Russia’s air defense system, Erdogan remains more defiant than ever, which should cause even more concern as Turkey’s economy struggles with 80% inflation.

Erdogan condemned the sanctions as a “blatant attack” on Turkish sovereign efforts to establish an independent defense industry. And political parties representing a large majority in the Turkish parliament issued a joint statement opposing the US decision. Turkey’s Foreign Ministry said Turkey “will retaliate in the manner and time it deems appropriate”.

Erdogan’s measures declaring his support for a two-state solution in Cyprus and stating that if Greece declared its borders in the Aegean Sea, in accordance with the United Nations Convention on the Law of the Sea (UNCLOS), it would be considered as a casus belli, says Erdogan is committed to continuing his aggression. Its rhetoric and actions demand an immediate, clear and united response.

Turkey’s rogue behavior must be decisively and immediately addressed with deeds, not just words. Robust sanctions are needed, combined with coordinated air and sea operations by the US, EU and “freedom of navigation” partner nations to remind Turkey, as other adversaries are reminded, where to stop. Turkey’s sovereignty and its responsibility to uphold the international rule of law as a nation-state and NATO ally begins.

Commander Demetries Grimes is a decorated US naval officer, airman, and diplomat. He served as Naval Attaché in Greece and Israel, Deputy Commander of the US Base in Crete and Advisor to the NATO Maritime Commander in London, UK.