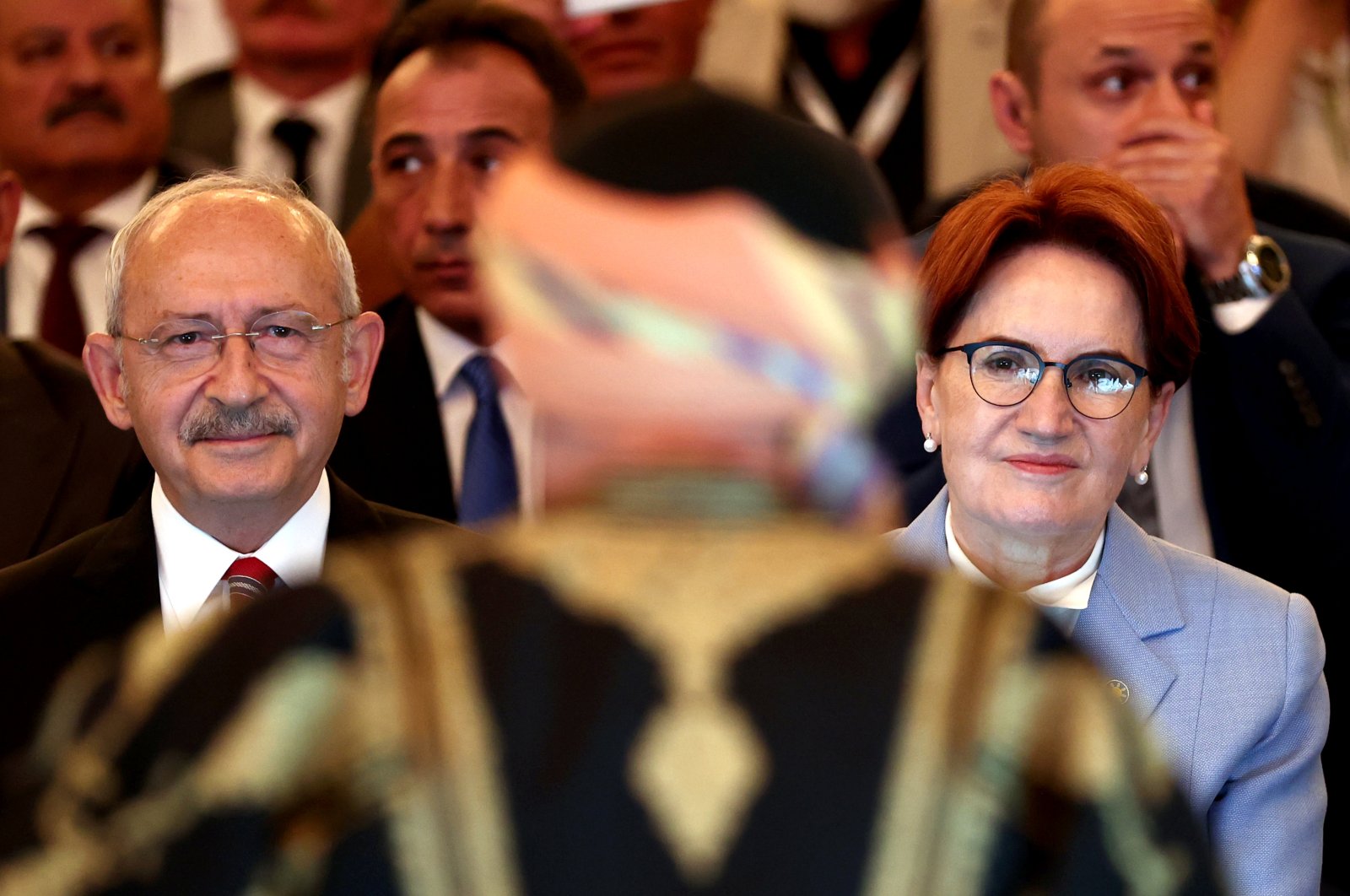 In response to the main opposition president, the Republican People’s Party (CHP), Kemal Kılıçdaroğlu, establishing himself as the joint candidate of the opposition bloc for the presidency, Meral Akşener, the president of the Good Party (İP), wreaked havoc in the opposition ranks by declaring that the table of six is ​​not an automatic buffer and adding that “we could possibly present our own candidate”.

A heated debate is currently underway between the CHP and Good Party supporters over the move that will eventually dissolve the opposition bloc.

The following issues are currently on the table:

Does Akşener’s objection automatically mean that the table of six will reject Kılıçdaroğlu’s candidacy?

Would the president of the CHP use a potential refusal to impose another candidate on the base of his party?

Would such a rejection create an opportunity for the ruling People’s Alliance?

In light of the most recent developments, the five right-wing parties, which are part of the opposition bloc, would face two distinct forms of criticism if Kılıçdaroğlu ultimately wins the nomination. They will be accused of going with the flow and allowing the opposition bloc to comply with the demands of the Peoples’ Democratic Party (HDP) – which is not part of the bloc.

One thing is clear: opposition leaders have made forceful statements in front of the cameras ahead of their ongoing monthly meetings attesting to the depth of the ongoing crisis. Obviously, who will become the opposition presidential candidate is far more important than the agenda of the opposition bloc or the transition process or the power-sharing arrangement.

“A Clash of Big Egos”

In fact, the HDP’s rejection of the candidacy of Akşener and Ankara Mayor Mansur Yavaş demonstrates that the issue of endorsing a common candidate is not limited to shaking hands with a specific candidate.

In this respect, it would not be enough to interpret Akşener’s remarks – that the bloc is not an automatic buffer – as an attempt to strengthen his hand in the negotiations for the joint candidacy. Instead, this statement concerned the potential performance of each of the bloc’s components in next year’s elections and, should the opposition win, the future of Turkish politics.

Bearing in mind the high level of volatility between the main opposition party and the Good Party, the former could increase its vote share at the expense of Akşener’s movement and possibly various fringe parties if Kılıçdaroğlu receives the blessing of the block. Such a development, in turn, would make cogeneration more important and undermine the influence of others.

However, the problem that arises also goes beyond this.

It is no secret that the main problem of the Good Party is the presence of the HDP within the opposition bloc. Specifically, Akşener’s base is not happy with the HDP, which they see as an extension of the PKK terrorist group, lecturing and scrutinizing their party. In this sense, the CHP’s policy of involving the HDP (which is not officially part of the opposition bloc) in the process of selecting a candidate poses a serious ideological challenge for the Good Party in the eyes of the electorate. .

After all, the “HDP effect” represents an unmanageable challenge for a political party that rests on a nationalist base. In other words, the HDP’s ability to collaborate with Kılıçdaroğlu to block the candidacy of Good Party favorites amounts to an ideological burden that Akşener cannot shoulder.

As such, the question that arises goes beyond who can choose the candidate or a shock of big egos.

The Good Party, which remains the most popular right-wing party within the opposition bloc, opposing Kılıçdaroğlu’s candidacy also shows much greater disagreement.

If the opposition won the 2023 elections, what would be the center of gravity of Turkish politics? Will the political arena of the country be organized around the CHP and the HDP or the CHP and the Good Party?

What then would be the direction of Türkiye after 2023?

Insisting that it will play a “key role” in next year’s elections and calling for “open negotiation and direct dialogue”, the HDP keeps saying it will not be content secondary – unlike the municipal elections of 2019.

This is why Kılıçdaroğlu’s candidacy, coupled with the influence of the HDP, puts the Good Party between a rock and a hard place. The movement thus lost ideological ground to the ruling People’s Alliance and enabled the CHP and the Democracy and Progress Party (DEVA) to eclipse Akşener’s movement in terms of activity level.

In light of the above, the President of the Good Party used her most recent statements.

At this point, no opposition party would dare to dissolve the “table for six”. Yet the opposition bloc is losing influence despite avoiding dissolution. Indeed, the showdown between the CHP and the Good Party makes it clear that hardly anyone cares about the four fringe parties sitting around the “table for six”. Opposition bloc mentors are also urging opposition leaders to choose a candidate before the campaign kicks off, citing the AKP party’s upturn in opinion polls.

President Recep Tayyip Erdoğan, in turn, has already launched his re-election campaign with the main theme of “Century of Turkey”. The AKP party and its leader will unveil their “vision document”, which positions itself as an inclusive and inspiring movement that only can solve the country’s pressing problems, on October 28.