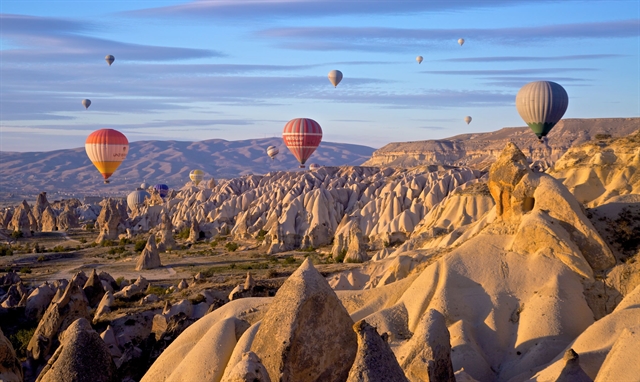 VIETNAM, October 29 – On the occasion of the National Day of the Republic of Türkiye on Saturday (October 29, 2022), Việt Nam News presents an article written by Türkiye Ambassador to Việt Nam Haldun Tekneci.

It gives me great pleasure to address the readers of News from Việt Nam on the occasion of the 99th anniversary of the founding of the Republic of Turkey. I would like to extend our warmest greetings to the Vietnamese people and their leaders.

Today we celebrate the 99th anniversary of our Republic with great joy and pride. After almost ten decades of progress through the founding principles laid down by Mustafa Kemal Atatürk – the founder and first President of the Republic of Türkiye – our country is now focused on stability with a developing economy.

Turkey’s geographical proximity to three different continents provides a unique advantage to enrich and prosper our nation culturally, historically and economically. In 2021, the highest export figure in the history of our Republic was reached with a value of 225.4 billion dollars. This trend of our exports continued in the first seven months of 2022 reaching 144.4 billion dollars, an increase of 19%. The Turkish economy, meanwhile, grew by 11% in 2021, while it grew by 7.3% in the first quarter of 2022.

Since the day of its founding, Turkey has been at the forefront of establishing and maintaining regional and international prosperity, stability and peace. In line with this objective, Turkey has actively participated in peacekeeping and mediation efforts, which have become more important than ever as the world currently faces multiple security challenges and asymmetric threats, following the motto “Peace at home, peace in the world” of Mustafa Kemal Atatürk.

As one of the values ​​stemming from its history and culture, Turkey also has a strong tradition of humanitarian aid with the belief that sharing enriches. Regardless of race, religion, language or gender, Turkey contributes to international efforts by supporting countries that find themselves in a difficult situation due to several causes such as natural disasters, war, poverty and social clashes.

Next year we will commemorate the 100th anniversary of our Republic, as well as the 45th anniversary of the establishment of Turkey’s diplomatic relations with Vietnam. Turkey and Vietnam have continuously developed their friendship and cooperation relations since 1978. Over the years, we have witnessed the strengthening and enrichment of our relations in different fields. Our trade volume has reached over $2 billion over the past decade. Moreover, there is an increase in the number of Turkish companies that are interested in the Vietnamese market. Last year, one of our FMCG companies started operations in Vietnam with a large investment. We expect Turkish companies, including those in the technology and white goods sectors, to strengthen their presence in the Vietnamese market in the coming period.

In addition, Turkish Airlines, our national airline which has contributed to the development of our economic and trade relations, has continued its activities in Vietnam without interruption even during the pandemic period. I believe that the increase in passenger and cargo flights will continue to have a positive impact on the consolidation of relations between the two countries.

Over the past two years, the world has suffered the adverse effects of the Covid-19 pandemic, which has demonstrated the importance of working in solidarity to overcome difficult situations. In these difficult times, our humble but crucial mutual efforts with Vietnam have been the manifestation of our potential future endeavours.

The educational, social, cultural and tourist ties between Turkey and Việt Nam have also been strengthened. Every year, we offer an increasing number of Vietnamese students the opportunity to study in our country with Türkiye scholarships. This year alone, seven Vietnamese students have obtained scholarships. Our inter-institutional cooperation with the Vietnamese authorities is also maintained with a number of education and training programmes. In addition to this, the social programs run by Türkiye aim to support the welfare of the friendly Vietnamese people.

We have recently observed that Turkish TV series broadcast in Vietnam have gained popularity among the public, which paves the way for our nations to come closer together, enhances the interest between the two countries and enables the development of tourism. To this end, the cultural events that will be organized next year both in Việt Nam and in Turkey, in honor of the establishment of our relations, will further contribute to strengthening the ties between the Turkish and Vietnamese peoples.

Turkey and Việt Nam maintain evolving friendly relations both bilaterally and in international fora with significant potential. Our sector dialogue partnership within ASEAN, as well as our joint roles with Vietnam in other international platforms, create opportunities to strengthen our ties and enjoy cooperation in multiple areas according to our interests. and common goals. I sincerely believe that the deepening of our relations will bear fruit in various fields in the coming period. VNS