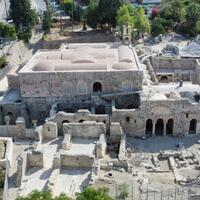 The Ministry of Culture and Tourism has launched comprehensive restoration works at the famous St. Nicholas Memorial Museum, one of the holy places in the Orthodox world, in the southern province of Demre district in Antalya to give it a facelift .

The museum is one of the most important historical structures in Turkish and Antalya tourism. The restoration work has been carried out in accordance with national and international conservation principles and there will be the least interference in the original values ​​of the building.

As part of the restoration carried out so far, infrastructure and drainage works have been completed to reduce the effects of rain and groundwater on the structure and its surroundings since the structure is below the level of the sea. The original Byzantine canal from the ancient period, located to the north of the building, was also included in this system and regained its function.

Conservation of the building’s original murals and mosaics also continues. While conservation and cleaning work continues on the original walls, the stone floors of the interior and exterior spaces are reinforced.

Since the St. Nicholas Memorial Museum is also a tourist center and serves as a museum, a tourist platform, a visitor area with additional buildings and landscaping will be made to allow individuals to visit the site. While the existing restroom section of the museum will be demolished, a new one will be built in its place.

Nilüfer Sezgin, director of the Museum of Lycian Civilizations, provided information on the restoration work carried out at the St. Nicholas Memorial Museum.

“The St. Nicholas Memorial Museum is very important for Turkish and Antalya tourism. The restoration work initiated in this holy place of the Orthodox world is continuing rapidly. First, with the removal of the old roof structure, the aesthetic appearance of the museum will be accentuated by the new roof construction. Murals and mosaics are documented and consolidated. The retaining wall and the landscape will be renewed. We are working to preserve the authenticity of the St. Nicholas Memorial Museum, which has been preserved for centuries, for future generations,” she said.

Emre Dertli, a member of the restoration team working on the murals, said: “First, documentation work is done on the murals under the supervision of expert restorers. Then it will be implemented according to this documentation.