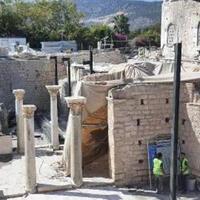 An excavation team has discovered the exact location of the tomb of Saint Nicholas, also known as ‘Santa Claus’, and the ground he walked on, inside the Church of Saint Nicholas in the province southern part of Demre district in Antalya.

“This is a very important discovery that will add to the value of the church,” Osman Eravşar, the head of the provincial council for the preservation of cultural heritage in Antalya, told Demirören news agency.

Living between 270 and 343, Saint Nicholas was an early Christian bishop during the time of the Roman Empire. Due to the many miracles attributed to his intercession, he is also known as “Nicholas the Wonderful”.

St. Nicholas Church, located in Demre, was built in 520 on the foundations of an older Christian church where St. Nicholas served as bishop and was buried.

“The first church was submerged with the rising Mediterranean Sea, and a few centuries later a new church was built above it,” Eravşar said.

“We have now reached the remains of the first church and the ground on which Saint Nicholas walked,” he noted.

The floor will be exposed after being covered.

Another thing carried out in the restoration works was “the opening of the roof of the church”.

“In the 1980s, a concrete roof was built over the historic church to prevent rain from falling on the church,” the expert said and added, “We removed the concrete roof and an easily removable roof system will be installed”.

Very little is known about Saint Nicholas, but his legendary habit of giving secret gifts gave rise to the traditional model of “Santa Claus” and is named after him. St. Nicholas Church is on UNESCO’s tentative list to become a World Heritage Site.