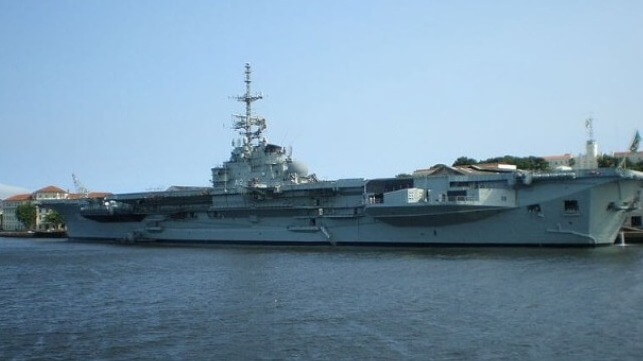 Turkish officials confirmed today that the decommissioned Brazilian Navy aircraft carrier NAe Sao Paulo which was to be dismantled at Aliaga has backtracked and is heading back to Brazil. The tug towing the carrier has changed its AIS signal now indicating that they will return to Rio de Janeiro on October 2. The two-month round trip is a similar fate to that of her sister ship, the French aircraft carrier. Clemenceau which was also refused by the Indian government in 2006.

Writing that the will of the Turkish people was honored, Ednan Arslan, a member of the Turkish parliament, confirmed reports that the carrier was returning to Brazil. He tweeted an image of the AIS ending two weeks of speculation and initially a standoff between Brazil and Turkey.

Like its sistership, the challenge for the NAe Sao Paulo became the question of the presence of toxic materials on board the carrier and whether an adequate inspection had been made before the sale to the wreckers. Last year, Brazil auctioned off the carrier, which had been decommissioned in 2018, with reports that only one of the eight bids met the conditions and had the necessary credentials. The carrier left Rio on August 4, 2022, under tow.


Shortly after his departure, environmentalists began protest citing what they believed to be a faulty inspection of the ship which reported only small amounts of toxins on board. Monitoring organization NGO Shipbreaking reported that only 12% of spaces on board the carrier had been tested to prepare the report which estimated just 9.6 tonnes of asbestos-contaminated material on board the ship. The Clemenceau by comparison contained at least 600 tonnes of asbestos. The report did not test the electrical wiring and said there were no PCBs present. Finally, the NGO maintained that the carrier had been used by France in the 1960s with atmospheric nuclear bomb tests in the Pacific, which meant that it could have radioactive contamination.

Turkey responded by calling for a second inspection of the ship before it arrived, but Brazil said the ship had already left, making that impossible. Two weeks ago, Turkey’s Minister of Environment, Urban Planning and Climate Change, Murat Kurum, announced that due to Brazil’s failure to complete a second audit process, ” the brazilian navy ship NAe Sao Paulowho arrives at the ship dismantling plant in Izmir Aliaga, will be sent back.

The tug towing the aircraft carrier had been waiting off North Africa for two weeks with reports that British authorities had refused a transit permit through the Strait of Gibraltar. Media reported that Brazil had agreed to the ship returning but continued to linger off the Moroccan coast.

Commissioned in 1962 as Fochthe 32,800 dwt (fully loaded) carrier was a sister ship Clemenceau. France operated it for 37 years by reselling it while it was still in service in 2000 in Brazil where it would have a career troubled by mechanical breakdowns. After a fire in 2012, Brazil had announced that it would be fully refitted, but in 2017 it was listed as demobilized and officially decommissioned the following year.

The Clemenceau became the center of global attention, including protesters blocking her entrance to the Suez Canal, in 2006 when she was turned away after an Indian court ruled she should return to France. She was eventually dismantled from 2009 at a specialist facility in the UK that met international standards for handling toxic materials.