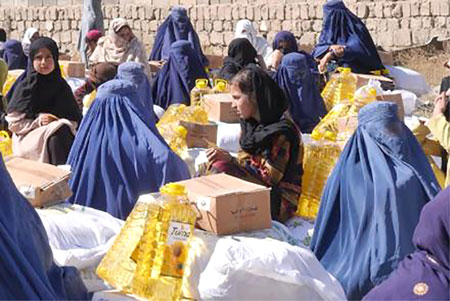 According to the head of the Turkish humanitarian aid organization IHH, Turkish citizens and businessmen have donated aid to poor residents of Afghanistan.

“This aid was provided so that the Afghans could fend for themselves. Agriculture accounts for 70% of Afghanistan’s economy, and we focus most of our efforts there, especially on women and orphans,” said IHH Country Director Mücahit Kılıç.

“Really deserving people should be given priority, and my second recommendation to charities is not to reveal the identity of people helped,” said Mujeeb Rahman, director of a charity foundation.

Gulnar, 45, a recipient of food aid from the organization, said she lost her husband and two of her children in a suicide bombing a year ago. She now lives with her six other children and is in a difficult financial situation.

“I sent my mother, son and daughter to Badakhshan province. I told them I couldn’t provide them with food,” Gulnar said.

Like Gulnar, some other families in the country said they were suffering economic hardship and asked the Islamic Emirate and aid agencies to provide assistance.

“We call on the government to provide employment opportunities for poor and destitute families, so that people’s problems are solved, because people are facing many challenges,” said Nabila, a destitute woman. “My grandchildren are at home, I have nothing left at home,” said Sediqa, a destitute woman.

According to IHH representatives, the organization has so far helped 5,000 Afghan families. IHH said Ankara has several projects to help the Afghan people, including helping farmers in several Afghan regions meet their agricultural needs.—Tolonews