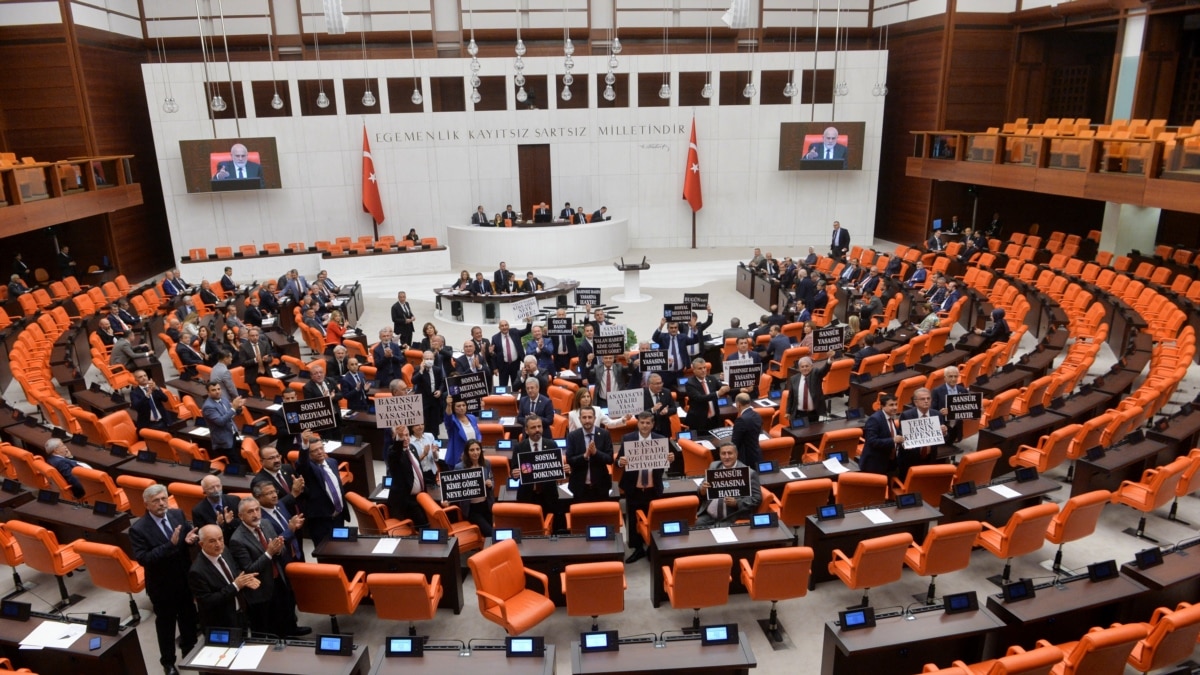 Turkey’s parliament has passed a new law that provides for prison sentences of up to three years for spreading “disinformation” online.

The ruling Justice and Development Party (AKP) and its coalition partner, the Nationalist Movement Party (MHP), passed the law on Thursday, despite objections from opposition parties, European countries and rights activists. rights.

Ankara said the bill was needed to stem the “serious threat” posed by disinformation and denied it would be used to target opposition voices.

Critics, however, said the provisions were vaguely worded and could be used to silence opposition voices.

The United States and the Parliamentary Assembly of the Council of Europe have expressed concern about the law.

A US State Department spokesperson told VOA on Friday that the law “could have a severe impact” on online news and entertainment, and “impose restrictions on the internet and media freedom.”

“We call on the Turkish government to ensure that approaches to countering disinformation do not inadvertently undermine the principles that underpin democracy, in particular freedom of expression, both online and offline,” said the spokesperson.

Some critics have warned that the law could restrict space for free speech ahead of Turkey’s elections next year.

Section 29 of the law, for example, provides for prison terms of up to three years for spreading false national security information online to “sow fear and disturb public order.” audience”.

Faruk Eren, head of the press union of the Confederation of Progressive Trade Unions of Turkey, pointed to what he called the law’s vague wording, saying: “From what we have experienced so far, we believe that censorship will be enforced with this law. .”

Journalists and ordinary citizens could face jail time or arrest, “if they share something the government doesn’t like and calls a lie on social media,” he told AFP. VOA.

Isin Elicin, who hosts a weekly news program for digital media outlet Medyascope, said the government was already pressuring the media. But now, she says, that pressure “has become legal.”

“It’s actually a form of terrorizing people. So much so that Twitter users and ordinary citizens will be afraid to retweet or even like what is written,” Elicin told VOA. “It’s an amendment that prevents speech.”

Turkey has one of the worst records in the world for imprisoning journalists, according to the New York-based Committee to Protect Journalists, which tracks media arrests.

Media watchdog Reporters Without Borders ranks Turkey 149th out of 180 countries, where the No.1 has the best media environment, in its press freedom index. The Paris-based group said “authoritarianism is gaining ground” in Turkey, where “all possible means are used to undermine criticism”.

The spokesperson also said claims that the United States has similar laws were inaccurate.

An AKP lawmaker was quoted in Turkish media this week as saying he was told by US officials the United States had similar regulations.

“The free flow of information and data is vital,” the spokesperson told VOA, adding that the United States urges Turkey to consult with civil society, the media and others to ensure the law has no “unintended consequences”.

The rapporteurs of the Parliamentary Assembly of the Council of Europe (PACE) described the law on disinformation as “another worrying setback for freedom of expression and of the media”.

John Howell and Boriss Cilevics, the PACE co-rapporteurs monitoring Turkey, said the law constituted “an unnecessary and disproportionate interference with freedom of expression”, as highlighted in a recent Commission opinion of Venice of the Council of Europe and a PACE resolution.

“This could have a chilling effect and trigger self-censorship, causing irreparable harm ahead of presidential and legislative elections scheduled for 2023,” they said in a statement shared with VOA on Friday.

Turkey’s Constitutional Court should review the law and take into account the views of the Council of Europe and the Venice Commission, the rapporteurs said.

The Venice Commission, which advises the Council of Europe’s rights watchdog, has warned the law could have a negative effect.

“Our main concern is the chilling effect this will have on the political debate in Turkey, because this bill will apply to everyone,” said Herdis Kjerulf Thorgeirsdottir, vice-president of the Venice Commission, at the start week. “The heavy penalties of one to three years imprisonment for those found guilty of spreading false or misleading information will lead to widespread self-censorship, which is already struggling in a hostile environment.

Turkey’s opposition Republican People’s Party (CHP) said on Friday it would ask the Constitutional Court to strike down the legislation, which CHP member Burak Erbay described to Reuters as “the biggest law censorship of history”.

Eren of the press union told VOA that the law “isn’t just the journalists’ problem.”

“People should protect their right to information. The public should support journalists. This law may create this opportunity to bring journalists and the public closer together,” he said.

Elicin, of Medyascope, said the new law made her uncomfortable but would not change her approach to journalism at a crucial time before the election.

“What we want is to create fear, to hide information, to appease people, to intimidate,” she told VOA. But “people need to learn the truth, to talk about all subjects and, in addition, to discuss them”.

The bill now goes to the President of Turkey for final approval.

VOA Turkish Service contributed to this report. Some information comes from Reuters.