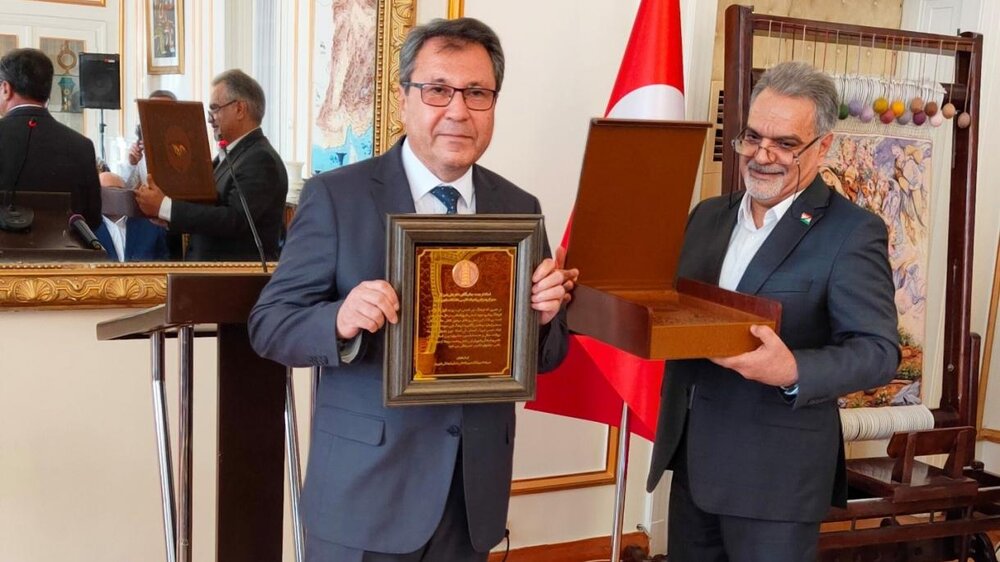 TEHRAN — Turkish scholar Ali Temizel has been awarded the Shahriar Medal, a decoration Iran awards to foreign scholars who have made outstanding contributions to the study of the Persian language.

Director of the Mevlana Research Institute of Selcuk University Temizel received the medal from Iranian Ambassador to Ankara Mohammad Farazmand during a special ceremony at the Iranian Embassy , the Sadi Foundation, a Tehran-based organization that promotes the Persian language abroad, announced on Sunday.

In a short speech, Temizel expressed his thanks for the medal and spoke about the strong influence of the Persian language in Turkey.

He also underlined Turkish students‘ desire for their country’s history and culture and noted that it is difficult to learn about the issues without knowing the Persian language.

The Turkish expert on Persian literature expressed his hope that an expansion of academic ties between Iran and Turkey would help improve Persian language learning in Turkey.

For his part, Farazmand said: “The Persian language is a key part of Turkish culture, which has spread to Anatolia over the centuries, and learning Farsi has turned into a growing movement. flourishing”.

Alireza Danesh, Iranian cultural attaché in Turkey, was also present at the ceremony.

He expressed his appreciation for Temizel’s hard work in promoting Iranian poet Mohammad-Hossein Behjat, better known by his pseudonym Shahriar, in Turkey and said, “The awarding of this cultural medal to Professor Temizel should be seen as an appreciation of his long service in spreading the Persian language and culture in Anatolia.

Yakup Safak, a professor at Kirikkale University, also received an award for his contributions to Persian literature studies in Turkey.

In his recent studies, Safak has focused on the Persian mystic and poetess Molana Jalal ad-Din Rumi and has published several books and articles in this area.

So far, twelve Turkish scholars have been decorated by Iran with Shahriar medals.

The decoration is named after the poet Shahriar, the most important figure in contemporary Persian literature.

He was mainly influenced by the poetry of Hafez, a Persian poet writing in the 14th century.

“Heidar Babaya Salam” is Shahriar’s most famous collection of Azerbaijani poetry, which highlights his birthplace, the village of Heidar Baba.